I knew that pigs are used to hunt for truffles, but not dogs.  So when I learned that there is a particular breed with the innate ability to sniff out the esteemed fungi, the Lagotto Romagnolo.

I was lucky enough to join in on a truffle hunt in Burgundy, home of the Burgundian truffle (Tuber aestivum).  A different species than the more well-known black truffle (Tuber melanosporum) which grows in the Perigord region, the Burgundian version is equally delicious (I recommend it thinly sliced in a simple salad of garden-fresh lettuce and vinagrette, if you are lucky enough to get your hands on them!).

Truffles can be cultivated, in a sense, by taking advantage of the symbiotic relationship between the truffles’ mycelia and the root system of certain types of trees, such as cedars, oaks, and hazels.  If a grove is planted in the appropriate soil conditions (the Burgundian truffle prefers calcarious soil types), the mycelia, or underground component of the fungus, will follow the roots of the trees as they grow up (providing the appropriate shaded and forested conditions), establishing the necessary conditions for truffle production.

The truffle hunter can attempt to search for the prized fungi by himself, but as they are often present as deep as 30 centimeters below the surface, he isn’t likely to have much luck alone.  Luckily, he has several tools available at his disposal – pigs, dogs, and flies.  The difficulty with pigs and dogs is that they must be trained not to eat their spoils.  But this is likely a simpler task than keeping track of your fly!

Though this hasn’t been a great year for truffle hunting, with the help of two canine noses we managed to walk away with a decent harvest!

(descubando – okay this was at the winery, but not something I do regularly)

(llama on the beach – Pichilemu, Chile) 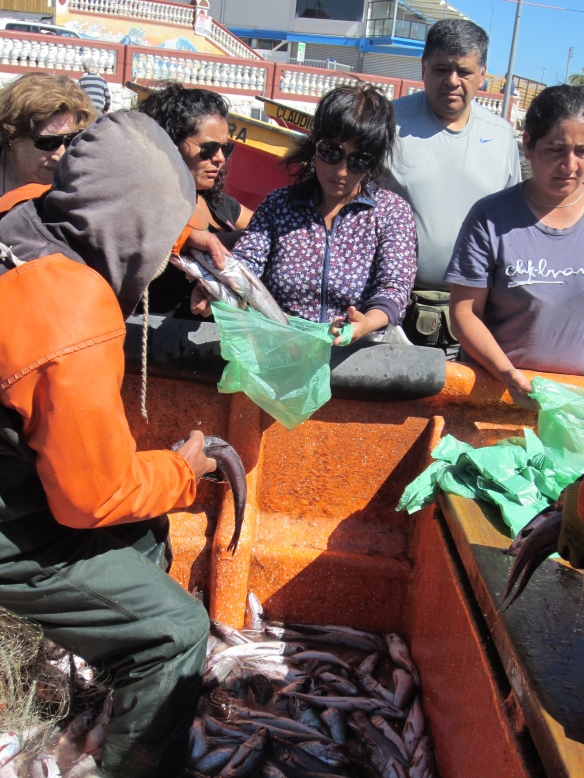 (Fresh fish for about US$4 per kilo, sold directly from the boat that was towed ashore by a pair of tractors) 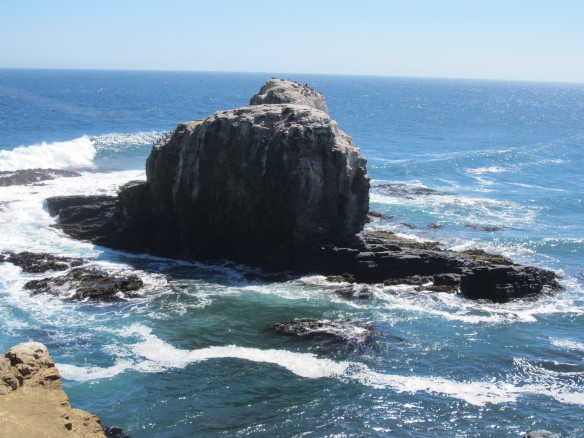 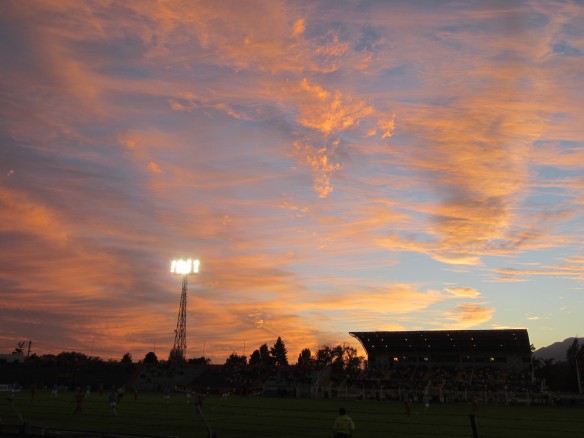 After the end of harvest, I was invited to spend a few days in Brittany (Bretagne in French).  It was truly a vacation from what I’ve been doing, as no wine is made in Brittany (okay, not entirely true – very, very little wine is made there, and no wine that is made there can be sold, as there are no wine appellations in the region).  Instead, regional specialties include lots of seafood, cakes and biscuits (made with as much butter as possible – as Yves said, it wouldn’t be possible to put in more butter), crêpes and gallettes (crêpes made with buckwheat flour and usually have savory fillings, particularly eggs, cheese, and ham), and cider.  There is also a lot of history in the region, which was occupied by the Germans during WWII, and thus retains many souvenirs in the form of forts and other fortifications.  One such structure is the Keroman Submarine Base in Lorient, essentially the only structure to survive when the city was completely destroyed by the Americans in order to liberate France from Nazi control.

I stayed with Yves and Monique, Marine Dubard’s parents (I wasn’t quite ready to leave the family entirely when I left the vineyards last week…) in their home on le Cabellou, a “presque-ile” (“almost-island” or peninsula) just south of the town of Concarneau.  Le Cabellou is a gorgeous little area, and I will soon be posting a little blurb (in English) on the website that Yves has developed for le Cabellou.

One of the many, many things my wonderful hosts took me to was the annual Fête du Cidre, where they had demonstrations of how cider is made, cider tasting, a display of the variety of apples one can find in Brittany, crêpes, and roasted châtaignes (chestnuts).

Nearly six weeks after it began, harvest is nearly complete.  The last grapes are scheduled to be picked next Wednesday, though the weather keeps surprising us (with sun and warmth, happily!), so this projection remains subject to change.  In the winery, the end of harvest translates into “remontage, remontage, remontage.”  Red wine is made by loading the red grapes directly into a fermentation tank (without pressing), and inoculating the whole lot – skins and seeds included – with yeast.  As it ferments, the marc, or layer of grape skins, floats to the top of the tank.  Remontage, or pumping-over in English, entails pumping the juice from the bottom of the tank over the top of the marc in order to keep it moist and extract fragrant and colored compounds into the must (fermenting juice).  When done by hand, this is a very labor-intensive endeavor (I know because I did it the first day), as it requires perching atop the tank holding the hose in order to spray must in all directions atop the marc.  This is made significantly more challenging by the fact that carbon dioxide gas is being constantly emitted from the tank, in quantities sufficient to asphyxiate you (or at least cause you to pass out and fall off the tank – choose your poison), so you have to maneuver breathing fresh air while still throughouly spraying all over the inside of the tank.  Fortunately, we have special devices that can be attached to the hose inside the top of the tank that have a little spinning rudder that evenly sprays the top of the tank without requiring human intervention.  It is much more effective than remontage-by-hand, and frees up a lot of time to be spent giving TLC to the wine in other ways.  For instance, nutrients can be added to keep the yeast happy, or tannins (specifically, catechin) can be added in order to fix the color compounds in the wine.  Catechin reacts with anthocyanins (the red-colored molecules in grapes and red berries) to form a stable complex that can give the wine a more desirable, richer color.  The anthocyanins don’t need any help to become affixed to your hands though:

Hand after one day of working with red wine.  Fortunately we are not finished with the white wines, as white wine helps to remove some of the staining, so my hands have not become exponentially blacker than this over time.

Despite there being plenty of work to keep us all busy in the winery, I have gotten away a bit as well.  Last week Sandrine, who works in the office, took me to her house for a night, where I became acquainted with her parents’ pigs, 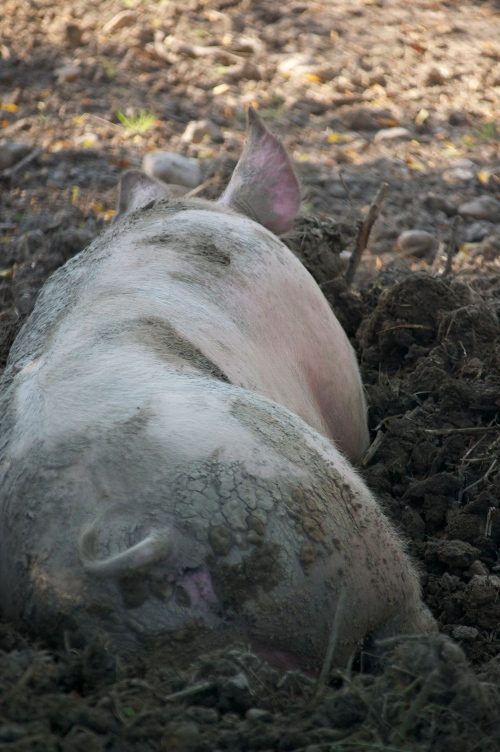 And all of the products that they make from them, as well as from anything else that they can grow or find on their property. 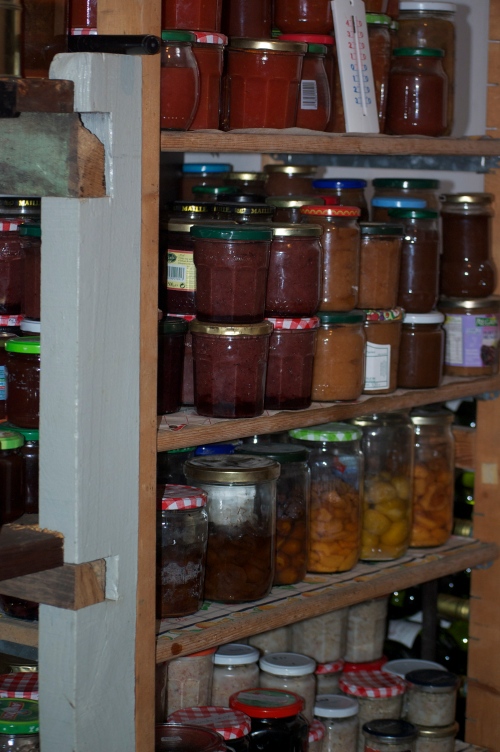 She prepared a meal extremely traditional for this region (the Perigord), of foie gras with Montbazillac (a sweet white wine) to start, duck confit with cepes and potatoes and a St. Emillion, and Banyuls, a naturally sweet red wine (aged for many years – this one had been for 15 – in wooden casks outdoors where the wine is subject to oxidataion) from the south of France.  We finished the evening with the slightly less traditional activity of Wii Bowling…

I also visited the city of Bergerac, of key importance as I am in the middle of Bergerac wine country here.  When I saw this statue I finally realized why the name had sounded so familiar ever since I arrived…

Just as St. Emillion was riddled with wine shops, Bergerac is teeming with shops such as these:

While there I also tasted a wine with brettanomyces for the first time (smells and tastes like farm animals had a little party in your glass – I knew it was a smell I recognized but, thankfully, couldn’t place it, so politely described it as “interesting,” not knowing what it was until Marine told me later).

Monday evening I was invited to go (attempt to) see – and hear – stags calling for their mates.  We drove to a spot where they are known to show up, and waited for them to appear (with beers in hand, as I believe that in France it is considered sacrilege to sit and wait somewhere in the evening without an apertif).  It turned into quite the social occasion when about 15 others showed up (including someone that I work with), but the stags apparently did not feel obliged to attend the event, as none had appeared by the time night fell.  As someone said on the way home, “Well, at least we had a beer.”

Today after checking the density and temperature of the musts that we have been racking,  Muriel took me with her to hunt for cèpes! This week has been filled with talk of these precious mushrooms, as this is the high season for them and this year they happen to be exceptionally abundant.   She taught me the differences between edible and nonedible mushrooms, as well as the difference between a cèpe and a tremoul, which are also edible but not quite as good as the cèpes.  There are two types of cèpe here, black and brown, and Muriel gave me some of each to try, as well as some tremoul (which you only eat the top, or “chapeau” of, whereas you eat the stem of the cèpes) and a couple of girolles (a type of chantrelle) that we found.  I cooked them all separately so that I could compare, and definitely agree that the cèpes are better than the tremoul, and I liked the black cèpes slightly more than the brown (though they are both very delicious, almost sweet in character). 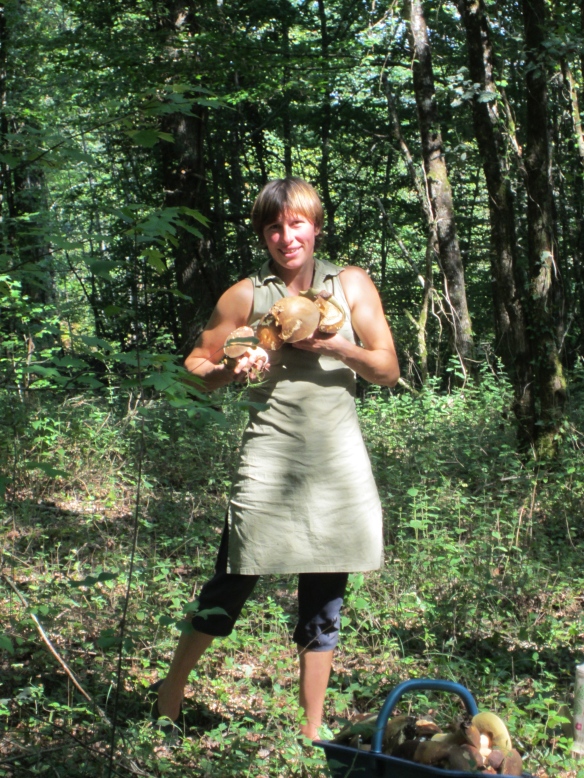 Muriel with just a tiny portion of our loot!

This year it really doesn’t even require much skill to find them – they are all over! 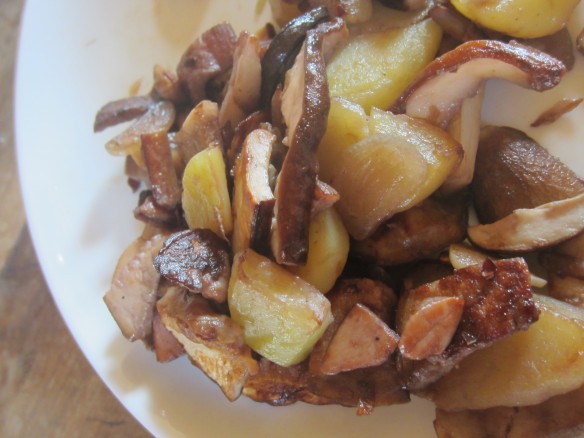 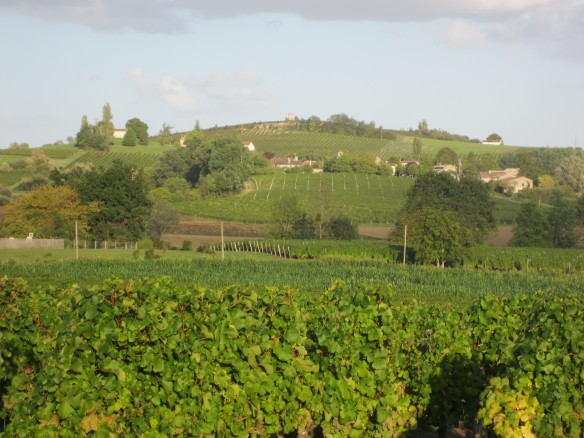 View from just behind the winery

Happy 1 year adoptiversary George! Couldn’t be happier that you found your spot on our couch.
Night out on the town for George’s birthday!